Do a quick Internet search for “proper running form” and you’ll get lost in scientific jargon: swing phase, stance time, loading rate, stretch reflex. But if you’re like me, you don’t need (or want) to know the nitty gritty science behind good form. You just want to know how to do it!

Instead of focusing on the overwhelming (not to mention boring) technicalities, stick to these simple, easy-to-implement and actionable running tricks. Not only will improving form dramatically cut your risk of overuse injuries so you can run consistently, but you’ll also enjoy it more and likely get even faster! The best part? You can do each of these things right now.

One important disclaimer: If you’ve been running for years and don’t have problems with injury or recurring aches and pains, you probably don’t need to alter how you run. Experienced runners who make significant changes to their form often become less efficient. That’s right — their form actually gets worse. 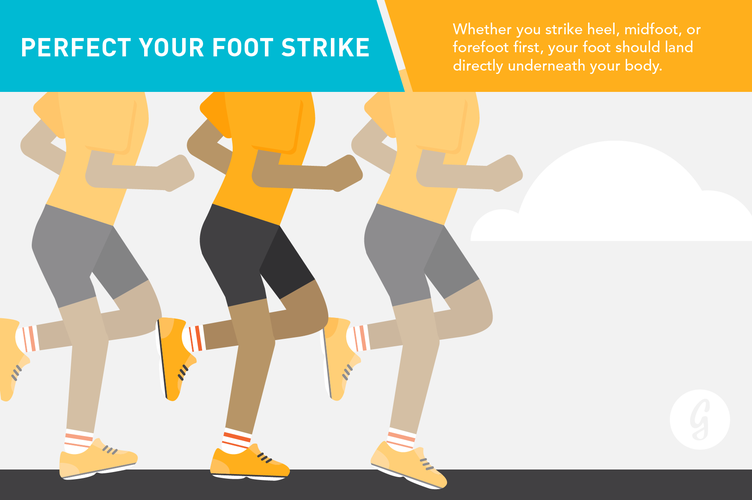 Many new runners tend to over-stride and reach out with their foot to take a longer stride. This creates a heel-smashing, aggressive foot strike that should be avoided because it sends far too much impact shock through the leg.

But heel-striking isn’t necessarily a bad thing. The truth is that it doesn’t really matter where on your foot you land with each step; there are enormously successful runners who are fore-, mid- and heel-strikers! The most important aspect is actually where your foot lands in relation to the rest of your body, rather than what part of your foot touches the ground first.

This change in form reduces the impact your legs experiences and cuts your injury risk by creating a more fluid, efficient stride. 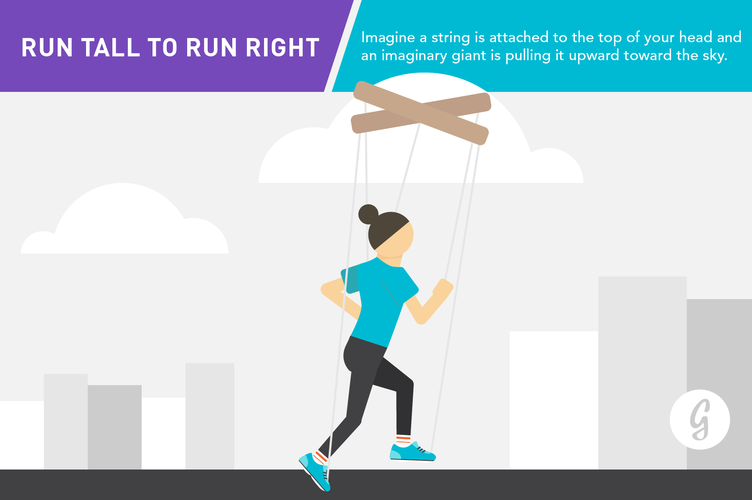 Your mom was right all those years ago: You should stand up straight. This applies to running posture, too.

Slouching, or leaning from the waist, is a common problem for many runners who try too hard to perfect that “forward lean” they heard was part of proper running form. While a slight forward lean is part of good form, it should come from the ankles, not the waist.

The best part? A slight forward lean from the ankles happens naturally without even trying. So don’t consciously try to lean forward. Instead, focus on running tall with a straight, erect posture.

To help you remember, pretend a string is attached to the top of your head and an imaginary giant is pulling it upward toward the sky. Creepy? Perhaps. But it’s an effective way to reinforce a tall, straight back with no slouching. 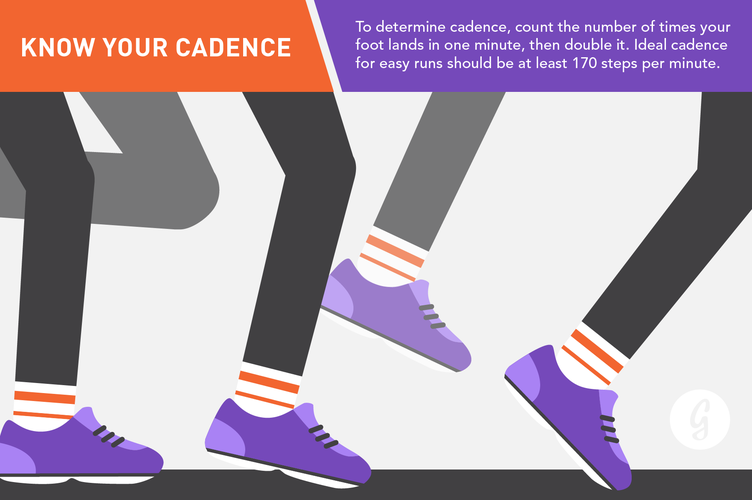 Cadence is the number of steps you take per minute (with both feet). The magic number for optimal cadence is thought to be 180 steps per minute, according to the legendary running coach Jack Daniels who observed at the 1984 Olympics that this was the average cadence of most elite runners.

But this isn’t a hard and fast number — it’s just a general guideline. When you’re running at an easy, comfortable pace, your cadence should be at least 170 steps per minute.

An average cadence of at least 170 for easy runs means you’ll reduce impact forces on your legs, cut your injury risk and even improve your running efficiency. How? With a shorter, faster stride, you’re “bounding” less and not introducing the stress that accompanies longer, more impactful strides. In other words, you’ll get hurt less often and probably get faster.

The next time you go for an easy run, count the number of times your foot lands in one minute, then double it (to account for both feet) to get your cadence. If your step rate is under 170, work on increasing it by roughly five percent every two to three weeks until your cadence increases.

To re-cap: Avoid over-striding, run tall and up that cadence. And that’s it! Most runners who come to me for coaching don’t need sophisticated form analyses in a running lab. Sure, those details can be fun, but typically they’re not as helpful as the easy-to-implement tips here. Focus on these fundamentals and you’ll reap the rewards: fewer injuries, more enjoyable runs and maybe even some new personal bests.

And doesn’t that make running a lot more fun?