Between 2005 and 2014, more than 45,000 people were struck and killed by cars while walking in the United States. In the two years since, walking has only grown more dangerous.

A new report from Smart Growth America, a D.C.-headquartered advocacy group that’s anti-sprawl, highlights the most dangerous metro areas in the country for pedestrians, and takes a look at who is most at risk for being struck and killed by a car. The study examines 104 metro regions to calculate a “pedestrian danger index” or PDI — a calculation of the total number of pedestrian deaths relative to the number of pedestrian commuters in the region.

Of the largest metros in the country, Houston ranked among the least safe, coming in at 15th overall, while New York City was among the safest cities for pedestrians, coming in at 95th. Chicago came in 80th, Washington, D.C., at 69th, Philadelphia at 68th, and Los Angeles landed at 51st.

Many of the 20 most dangerous are in the South, and eight of the top 10 are in Florida (which has long carried a rep for not being the friendliest state for people who walk or bike). In the top spot, the Cape Coral-Fort Meyers metro area, saw 2.55 annual pedestrian deaths per 100,000 pedestrian commuters.

The top 10 most dangerous metro regions for pedestrians were ranked as:

Out of the 51 metro areas that were also studied in 2014, 30 were found to be less dangerous in 2016. Of the 18 that grew more dangerous (three saw no change), the greatest increases were found in metros of Jacksonville, Florida, Riverside, California, Detroit, Memphis and Las Vegas.

The report also dug into the demographics of who was most at risk of being struck and killed by a car, and two key groups stood out: people of color and older adults. 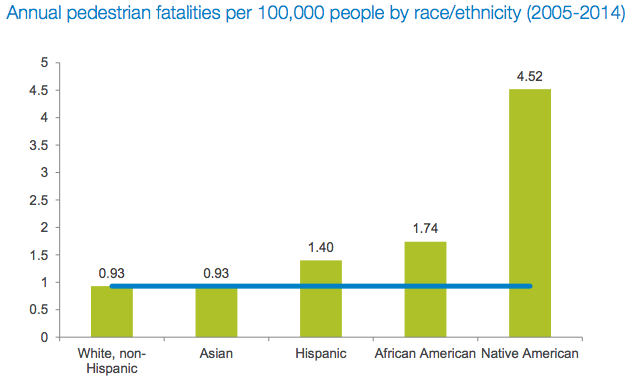 Older adults are also at greater risk, often due to greater difficulty seeing or hearing, and because much pedestrian infrastructure is not well designed to accommodate walkers or wheelchairs. Those over 65 years old are 50 percent more likely than younger individuals to be struck and killed by a car while walking.

Smart Growth America recommends taking a “complete streets” approach to pedestrian safety, looking at how and why people use streets and how streets aren’t serving the needs of the community. Wide, straight lanes, for example, encourage people to drive faster, making neighborhood streets less safe for those walking. Cars are three times more likely to cause death when hitting pedestrians while traveling at 30 mph than at 20 mph. And when some of the population does not have access to transit or a car, making a street pedestrian-free isn’t a realistic option.

Emiko Atherton, director of the National Complete Streets Coalition, points out that poor pedestrian infrastructure is a health issue, as well as an equity issue.

“America is facing an obesity epidemic, and the U.S. Surgeon General has encouraged people to walk more to help address it,” Atherton says. “But how can we ask people to walk more when so many streets are so dangerous for pedestrians? It’s outrageous.”