Yoga at Steakhouses, and Boot Camps in Dining Rooms

Michael Chernow, an exercise buff and the owner of the NoLIta seafood restaurant Seamore’s, started a weekly workout class available to his 40-odd employees soon after the restaurant opened in 2015.

Every Wednesday at 9 a.m., about 10 to 15 staff members of Seamore’s Fit Squad meet for either an indoor cycling class or for a four-mile run across the Williamsburg Bridge. Sometimes there are yoga or boot camp classes at the restaurant, where employees push aside tables and chairs to transform the dining room into a gym.

“I care deeply about the people who work for me, and this club is my way to offer them an avenue to health,” Mr. Chernow said.

The cost of organizing the group averages $200 a week, but the benefits to staff members, they say, is immeasurable.

The bartender Bobby Brower said that the squad got him back into exercise after more than a year away. Given his 12-hour shifts, usually followed by a 3 a.m. bedtime, Mr. Brower was apprehensive about the early-morning meetings, but he adjusted. “There’s such an energy to the group, and I look forward to waking up and getting a positive start to my day,” he said. Since joining the club, he’s dropped 10 pounds. 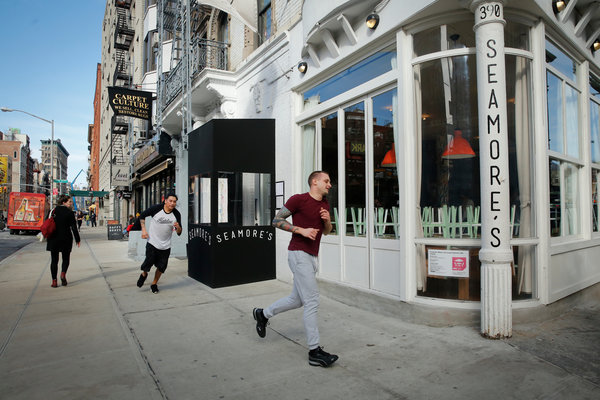 Seamore’s employees running around the block before work.
Nicole Craine for The New York Times

Taylor Nobel, a server, said, “I noticed right away that I was able to power through my shift, and I think of the workouts as an opportunity to stay healthy in a career that has a reputation for being the opposite.”

Seamore’s is one of several New York City restaurants encouraging employee bonding and wellness through fitness.

Claus Meyer, the owner of Great Northern Food Hall and Agern, two Nordic restaurants in Grand Central Terminal, leads a monthly running club, which is open to his 350 employees as well as the general public. Attendees meet in Central Park and run three to six miles. Afterward, they head to Grand Central, where they relax and chat over free coffee and cinnamon buns.

“I try to counteract my constant eating by being active daily, and I wanted to give that same chance to my employees and the larger community,” Mr. Meyer said.

The West Village steakhouse Quality Eats offers yoga classes twice a month at the restaurant. One server, Hali Tsotetsi, leads around 10 co-workers through an hourlong session of vinyasa moves, along with some meditation. “The yoga began as a team building initiative and has now become a part of the restaurant’s culture,” Ms. Tsotetsi said.

For some, the exercise doesn’t have to be extreme to make a difference. The chef Michael White of the Altamarea Group regularly holds walking meetings around the city with staff members from several of his restaurants, including Marea and Vaucluse. “Whether we’re discussing business or menus, doing it while we’re walking, getting fresh air and increasing our heart rates makes the meetings more productive,” Mr. White said.

Mr. White has lost 137 pounds since starting the walking meetings, he said. “There’s no question that walking has changed my life,” he said, “and hopefully, has also had a positive impact on the employees who walk with me.”
Source: The New York Times
February 17, 2017
By Shivani Vora
https://mobile.nytimes.com/2017/02/17/nyregion/yoga-boot-camps-restaurants.html

It’s Bulldozers vs. Neighborhoods in ‘Citizen Jane’s’ Clash of the Urban Renewal Titans

There are no upcoming events at this time.